What a wonderful word! Yet, what does it mean? How do you grant forgiveness; and, for what?

As much as Christians talk about forgiveness, you’d think they could tell you all about it. Yet, there is hardly one in a thousand who can give sound, Biblical answers to the questions above.

Forgiveness of others is to be modeled on one’s own forgiveness by Christ: “… forgiving one another just as God, in Christ has forgiven you” (Eph. 4:32).

Forgiveness must be extended to all who say they repent—even if the offense has been repeated (Cf. Luke 17:3). But it is only to be granted to those who confess wrong doing, claim to be repentant, and ask forgiveness (Prov. 28:13). In Mk. 11:25, Jesus tells you to forgive those who wronged you when you pray, thereby avoiding bitterness and resentment (Eph. 4:32). But, that is different from granting the wrongdoer forgiveness. You do that only when he repents. Forgiveness of others must reflect god’s forgiveness; He forgave you when you repented.

Some unthinking Christians advise forgiving another whether or not he confesses sin. But they misunderstood forgiveness. They urge this to benefit the one who forgives. Yet, it was for your benefit that God forgave you. Their self-centered concept of forgiveness is unbiblical. God did not forgive you until you repented, admitted you were a sinner, and believed. Indeed, even now, when God dispenses parental forgiveness, He says, “…if you don’t forgive men, then your Father won’t forgive your transgressions” (Matt. 6:15).

Some think when Christ prayed from the cross, “Father, forgive them,” He forgave apart from repentance. But Jesus granted no one forgiveness by those words. He was asking God to forgive. Did God answer? Yes. On the day of Pentecost, thousands of those same people were converted, and their sins were forgiven. But, that did not happen apart from the means. Peter called on them to repent and believe in order to receive forgiveness (Cf. Acts 2:38).

Because in forgiving one promises not to bring up the offender’s sin, to him, to others, or to himself, it is not right to forgive before repentance. Jesus requires you to confront an offender (Matt. 18:15ff) in order to bring about reconciliation. If he refuses to listen to you, instead of forgiving him, you must tell one or two others. If he won’t hear them, then you must tell the church. Indeed, apart from repentance, the matter, must be brought up to an increasingly larger number of persons. Why? Through their aid to win the offender. In love, true forgiveness seeks not to relieve the forgiver, but to deliver the offender from his burden of guilt. Out of concern for the other person, the offended party pursues the offender until the matter is settled before God and men. Any bitterness on his part, Jesus said, must be dealt with in prayer. Because forgiveness is a promise not to refer negatively to the offender’s sin any more, it would be utterly inconsistent to forgive an unrepentant person before Church discipline has been successfully used.

People who try to be kinder than God, end up becoming cruel to others. The kind thing is not to focus on relief for one’s self, by forgiving others whether they repent or not, but by every Biblical means to win offenders. It may seem unkind to bring matters up again and again when an offender refuses to be reconciled, but you must do so, not to irritate, but to help relieve him of the burden of his sin. To ignore him and focus on one’s self, saying, “feel better since I forgave Bob, even though he didn’t seek forgiveness,” is the epitome of the modern, self-centered psychological heresy.

Seeking forgiveness is not apologizing. There is nothing in the Bible about apologizing—the World’s substitute for forgiveness that doesn’t get the job done. You apologize, and say “I’m Sorry,” but have not admitted your sin. The offended party feels awkward, not knowing how to respond. You are still holding the ball. You asked him to do nothing. But, confess your sin to him saying, “I have asked God to forgive me, and now I’m asking you,” and you pass the ball to the other person. You ask him to bury the matter for good. Jesus commands him to say “yes,” thereby making the promise that God does: “Your sins and you iniquities will I remember against you no more.” That brings the matter to a conclusion. Apologizing does not.

Is there someone to whom you should go ask forgiveness? Has someone sought it from you to whom you said “Once, yes; twice, maybe; three times, no!”? Perhaps there is someone whom you have never confronted about a matter that has brought about an unreconciled condition between you. Are any of these problems outstanding? Then you have business to attend to. Why not settle the matter today?

You don’t have to feel like it to forgive. Forgiveness is a promise that you can make and keep, whether you feel like it or not. And, it is easier to forgive another—even when he sins against you seven times a day—when you remember Christ’s great sacrifice for you sins by which He forgave you. And, then too, remember how many times a day He forgives you ever since you have become a believer. One other fact may help. If you have truly forgiven, it isn’t the fifth, or the third; it’s not even the second time. If you have truly buried the matter, truly forgiven—it’s always the first. 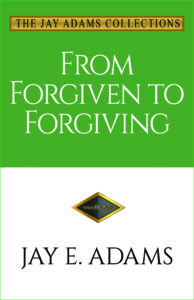 Study with Dr. Jay Adams. Learn at your convenience. We are an ACBC Certified Training Center.

Visit the INS bookstore for books by Dr. Jay Adams and all your biblical counseling resource needs.

The INS podcast with Dr. Jay Adams features a new (classic) message every Monday and Thursday.